Flattening the curve on foodborne illness and its costs in Africa

By Steven Jaffee and Delia Grace

Third of a series of blog posts on the release of the 2020 Annual Trends and Outlook Report (ATOR) during the virtual 2020 ReSAKSS Annual Conference Nov. 3–5. The theme of the 2020 ATOR is Sustaining Africa’s Agrifood System Transformation: The Role of Public Policies. This blog is based on Chapter 10 of the 2020 ATOR on “Why Food Safety Matters to Africa: Making the Case for Policy Action,” by Steven Jaffee, Spencer Henson, Delia Grace, Mateo Ambrosio, and Franck Berthe. Read the other posts here.

Food safety has never featured prominently on Africa’s development agenda. When it is an issue, typically the focus has been on high-value food items produced for export, while food safety in domestic markets has been largely neglected, both by governments and development partners. This must change. Recent research has shown that the health and economic consequences of foodborne diseases in Africa are significant and growing, as urbanization and income growth prompt dietary changes that increasingly expose consumers to food safety hazards.

The coming decade is critical. A “business as usual” approach to food safety, involving a combination of post-outbreak firefighting and fragmented regulatory and ad-hoc interventions, will do little to check the threats posed by unsafe food in many African countries. The good news is that many of these problems can be controlled and their costs reduced. A combination of incremental and systematic measures, well within the capacity of most governments, can flatten the curve of foodborne illness.

Until recently, research on foodborne diseases (FBDs) was mostly limited to high-income countries. Research and public health interventions in poorer countries largely focused on the so-called big three—tuberculosis, HIV/AIDS and malaria—and on maternal and child mortality. Yet, recent epidemiological research from the World Health Organization (WHO) shows the costs of neglecting FBDs in developing countries. Worldwide, the global health burden of FBDs is on par with the big three. The young, old, malnourished and poor are disproportionately impacted, and children under 5 are especially vulnerable.

Globally, Africa south of the Sahara and emerging Asia have the highest incidence of, and death rates from, FBDs. Yet while the two regions’ incidence rates are comparable, Africa’s estimated death rate is nearly four times higher. The reasons for that difference are not fully understood, but the prevalence of endemic ailments and poor diagnostic and treatment options probably account for much of it. Drawing on WHO data and other recent sources, we estimate that Africa experiences around 135 million cases of FBD and 180,000 FBD-related deaths per year. Microbial pathogens—especially Salmonella spp., toxigenic Escherichia coli, norovirus, and Campylobacter spp.—account for about 80% of Africa’s FBD burden.

The economic consequences of FBDs in Africa are correspondingly severe. A recent World Bank study estimated the productivity losses alone attributed to unsafe food within Africa at $20 billion in 2016, and the cost of treating these illnesses at an additional $3.5 billion. These costs are heaviest in larger, middle-income countries such as South Africa, Nigeria, and Egypt, yet are also significant elsewhere. Overall, the relative economic burden of FBD is higher for African countries than for developing countries elsewhere. 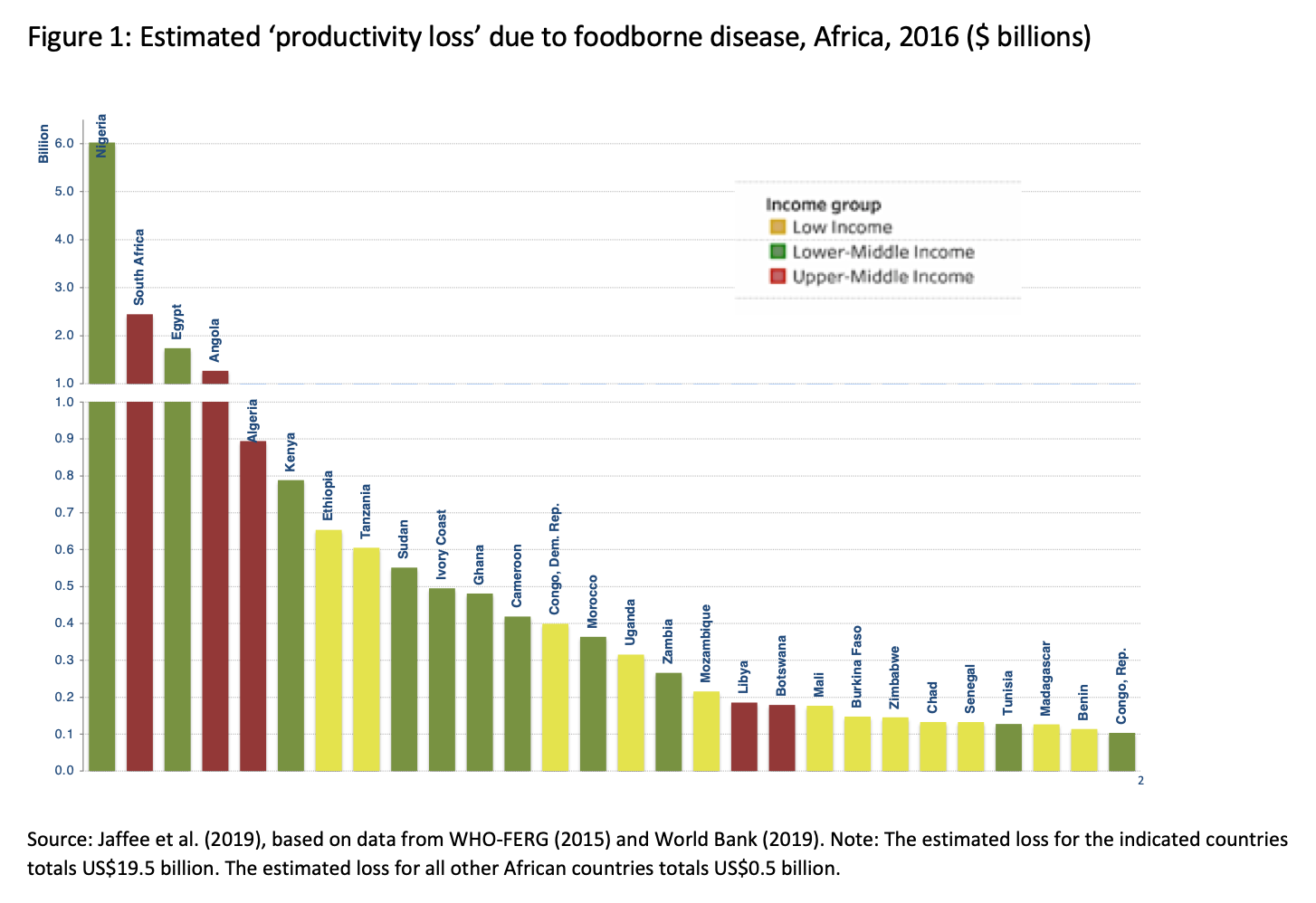 Both the health and economic consequences of FBDs in Africa are likely to grow as the continent develops. In low-income countries, food is typically produced close to the point of consumption and undergoes limited transformation. Starchy staples such as cassava, maize and rice predominate. Traditional processing techniques dominate and are often fairly effective at reducing risk. As they develop and urbanize, countries experience rapid shifts in diet and towards more intensified agriculture. Such transitions typically lead to increased consumption of fresh produce and animal-sourced foods, and a lengthening of food supply chains. Yet much of this perishable food continues to be handled and distributed through informal channels, creating potentially multiple points for food hazards to develop. In these transitioning food systems, the official regulatory apparatus is often overwhelmed by the breadth and depth of emerging challenges.

Until very recently, domestic food safety programs in Africa have been few and poorly funded. By contrast, literally hundreds of projects supported by trade partners or development agencies have sought to address international trade-related food safety problems. These have been beneficial and have helped to push Africa’s trade in safety-sensitive foods such as fish, fresh fruit, and vegetables from $3.8 billion in 2001 to $16.1 billion in 2017. But overall, the available evidence suggests that the trade-related costs associated with unsafe food in African countries are small compared to the domestic public health costs and productivity losses. In fact, we estimate the ratio between domestic and trade-related costs is likely to be on the order of 40 to 1, suggesting that the predominant attention of policy makers on the trade impacts of food safety has been deeply misguided.

African countries must implement better domestic food safety policies and support them with needed investment. But this, in itself, will not be enough to give them the upper hand against FBDs. What they need is nothing less than food safety paradigm shift. The traditional regulatory model, imported from high-income countries, centers on enforcement through regular inspection of food facilities and product testing, with set legal and financial penalties. This model is ill-suited to food systems in Africa, where smallholder farmers, micro- and small enterprises, and informal food channels predominate,  surveillance and inspection mechanisms can be weak, and court procedures challenging and slow. It introduces an antagonistic and often unproductive relationship between government and the private sector as regulator vs. regulated.

A better approach is to think of food safety as a shared responsibility between food business operators, consumers, and the government. In this model, governments set forth a vision, convene stakeholders and offer a diverse set of policy instruments to involve, incentivize, and leverage the actions of key value chain actors. Instead of being the “official food control” authority, governments should act as facilitators encouraging investments and behavior change. Experimentation and flexibility will be critical.

There are no quick fixes to Africa’s food safety challenges. They require a comprehensive approach that focuses on improving food safety awareness, practices, and governance. Foundational investments will be needed in people, infrastructure, and institutions. Addressing these issues will require sustained attention from technical agencies and government ministries as well as donors. It will require broader interventions to improve access to quality public health services, clean water and sanitation, and improved agricultural productivity. It will require, in short, a commitment commensurate to the scale of the problem. It is also likely, as in other parts of the world, that improvements will ultimately be driven by better-aware consumers demanding food safety and eliciting responses from public sector and food suppliers. Recognizing that is a good place to start.

Steven Jaffee is a Lecturer in the University of Maryland Department of Agricultural and Resource Economics; Delia Grace is a Professor at the Natural Resources Institute (UK) and Scientist with the International Livestock Research Institute (Kenya).

Sorry, the comment form is closed at this time.